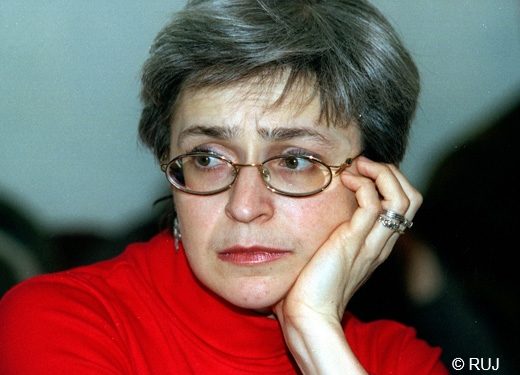 If you are going to Sochi to cover the Games next week, here are 10 essential things you need to know before you go. 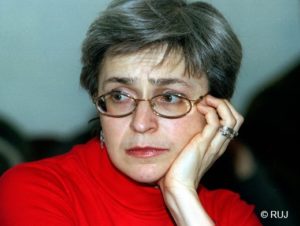 The murder of leading war reporter Anna Politkovskaya (in the picture) of Novaya Gazeta in
October 2007 has come to symbolise the culture ofimpunity for violence against journalists in Russia. Her murder caused international outrage and the Russia’s authorities vowed to find and punish her killers. Yet, to date, no one has been convicted for the crime after the acquittal of the three suspects in February 2009.

The failure to deliver justice in cases of killed journalists in Russia is not confined to Anna’s killing. In 2013, 3 journalists, Akhmednabi Akmednabiyev, Mikhail Beketov and Nikolai Potapov died in relation to their work. While impunity for crime in general had receded from its nadir in 1997, the Russian justice system was still failing to protect journalists when they are attacked for the work their professional activities. This may explain why Russia has remained one of the most dangerous countries for journalists in the world.

The Russian Union of Journalists (RUJ) estimates that at least 124 journalists and media workers have died in work related killing since 1991. Only ten of these cases were investigated between 1995 – 2008, resulting in five convictions and as many acquittals. In total, more than 349 media workers have gone missing or been killed in Russia since 1991.

On 17 December 2013, the State Duma adopted amendments to the Law on Information, Information Technologies and Protection of Information which would allow the Prosecutor General and his deputies to block websites containing content such as “calls for extremist activities” and to “participate in public events held in violation of government regulations”. This might restrict access to the Internet and limit media freedom and freedom of expression.

4. Restriction of media freedom and freedom of expression

The anti-gay law also applies to the press, television, radio, and the Internet, as well as foreign correspondents. Moreover, it is clearly contrary to the Olympic Charter stating that “any form of discrimination … on grounds of race, religion, politics, gender or otherwise is incompatible with belonging to the Olympic Movement.”

On 10 December 2013, Russian President, Vladimir Putin, announced that the RIA Novosti press agency would be replaced by a news agency called Russia Today and headed by polemical journalist and Kremlin support, Dmitry Kiselev. The takeover has led to outcry among the international journalist community which has expressed concerns over the future editorial independence of the news agency.

Muzzling does not only concern domestic journalists. It may also concern foreign correspondents. In November 2013, the authorities of the Sochi region stopped journalists from the Norwegian channel TV2 six times and brought them into custody three times. The two journalists were harassed, repeatedly questioned and threatened simply because they were suspected of critical reporting of the preparation of the Winter Games.

Foreign NGOs are harassed and endangered in the country since a law of 2012 considers them as “foreign agents” and obliges NGOs in Russia that receive foreign funding and whose activities are in any way “political” to register as “foreign agents” – a term associated in Russia with espionage.

Journalists should be aware of the electronic surveillance by the security service that monitors their communications (via telephone and the Internet).  According to a government decree (in Russian) signed by Prime Minister Dmitry Medvedev on 8 November 2013, the government are allowed to collect telephone and Internet data of the Games’ organisers, athletes, and others, with particular emphasis on journalists.

9. Denial of visa or entry

In the past few months, a number of foreign journalists have reported that their visa applications to visit Russia for journalistic activities have been denied. In December 2013, the American journalist, David Satter, was refused a visa to enter Russia.  In September, Rob Hornstra, an award-winning Dutch photojournalist who has been working in Russia’s turbulent North Caucasus region for five years, has been refused a Russian visa in what he says was likely an attempt to suspend his critical reporting ahead of the upcoming 2014 Winter Olympic Games in Sochi.

If you face similar problem with your journalist visa application, you can get in touch with us or our local affiliate, the Russian Union of Journalists.

According to the official social media policy of the International Olympic Committee, “accredited media may freely utilise social media platforms or websites for bona fide reporting purposes.” However, the guidelines do not allow “participants and other accredited persons” to post audio and/or video online.

WHAT CAN YOU DO?

The European Federation of Journalists (EFJ) is the largest journalists’ organisation in Europe representing more than 320,000 journalists in 37 countries. You can follow us on Facebook andTwitter. For updated news, subscribe to our fortnightly newsletterEFJ FOCUS.